His Holiness the Karmapa Comes to Sotheby’s for Asia Week
by Anthony Calnek | 19 Mar 2018
There are scores of depictions of holy figures on view at Sotheby’s during Asia Week, but on Friday we welcomed one of Tibetan Buddhism’s holiest leaders in the flesh. Ogyen Trinley Dorje, the 17th Karmapa Lama, was visiting the New York area as part of a Tibetan New Year celebration. The 32-year-old spiritual leader of millions stopped by Sotheby’s New York galleries where Asia Week, which covers 3500 years of artistic history across the continent, had just opened. He was especially interested in seeing the Ernst Collection of Himalayan Art, which spans the 12th to the 19th centuries and includes many Tibetan masterworks.
His Holiness stopped in front of one magnificent 16th-century Thangka (a traditional Tibetan Buddhist painting) which depicts Palden Rinchen surrounded by a heavenly retinue that includes one of the Karmapa’s predecessors: just to the right, wearing the black hat that signifies his office, is Karmapa Rangyung Dorje. Elsewhere in the galleries His Holiness would have seen a pocket-sized Gilt-Bronze Figure of a Karmapa, perfect for a traveling lama; the present Karmapa lives mainly in India, but is on a plane all the time to visit his global following. Sino-Tibetan politics notwithstanding, the Karmapa also made time to tour galleries devoted to Chinese paintings and works of art. 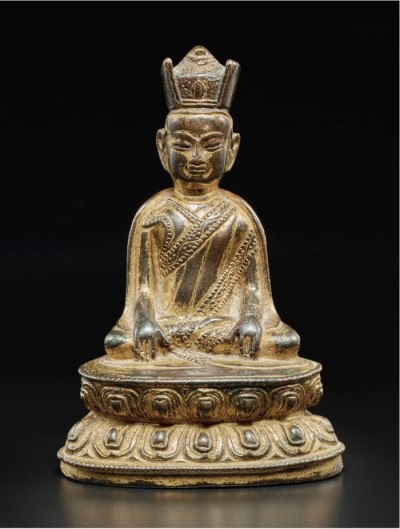 For Anuradha Ghosh-Mazumdar, head of the Indian and South-East Asian department at Sotheby’s, the visit was an unexpected and thrilling encounter. “I cannot describe what it was like to be in his presence,” she reports. “He radiates inner calm, which comes with higher spiritual consciousness and control.” Ghosh-Mazumdar notes that the Karmapa is himself an accomplished artist, primarily creating thangkas. So he was able to appreciate the Asia Week objects from an artistic, as well a spiritual, perspective. “He loved the shows,” she concludes. “It was the most amazing thing ever.” 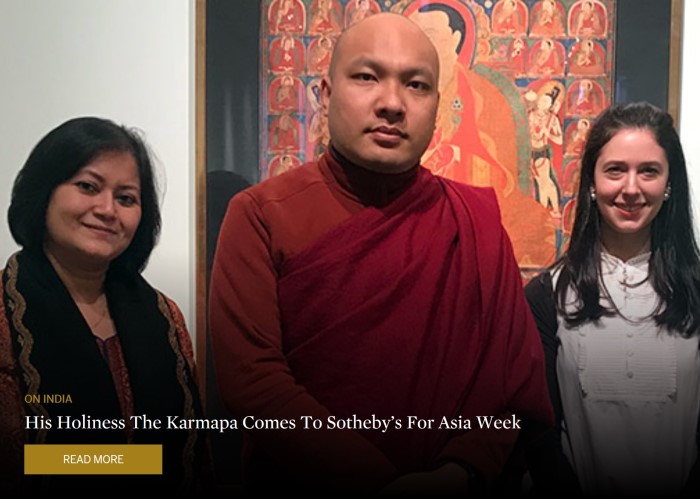